This past Wednesday, my grandfather Ty Cobb Wallace (better known as Bomp) left this world, less than a month shy of his 96th birthday.  He always told me that he wanted to live until he was 120 where to buy Phentermine US and be shot by a jealous husband.  While he didn’t quite make it that long, I’m convinced he stuck around these last couple years because he wanted to meet and spend time with Avery.  The last few days I’ve been listening to big band music virtually on a loop, as my love for that era of jazz (and subsequently jazz music in general) was entirely influenced by him.  But beyond that, his presence will be felt in my family forever.

In the last couple years, as he’s been more and more limited physically, I keep having the thought “oh to see what those eyes have seen.”  He grew up in the coal mining town of West Van Lear, Kentucky, where all the businesses were owned and operated by the coal company, and regular US currency wasn’t used (“I owe my soul to the company store” comes to mind).  After high school, he went off to the army, as most men his age did in World War II.  At first it seemed like an easy gig, as he was going through training in New Orleans, where he got to ride the trolley down to the beach every day.  He complained to his commanding officer that his hay fever was really getting to him, so he was transferred to an east coast location, and was promptly sent to the front lines in France (where he arrived not too long after D-day).  One more story about that below, but luckily he did not experience any actual combat during the war, and returned home, married my Grandmother, and had my Mother and Uncle.

He was a meat salesman with Armour in Kentucky for many years before eventually retiring and moving down to Florida.  His life in so many ways has always been the pure reflection of Americana to me: growing up in the rural south, going to war, living the “American Dream”, and eventually retiring to Florida and golfing for the rest of his days (with plenty of smoking and drinking throughout).  At times, my relationship with him was complicated, as he came from a generation where men were not supposed to be affectionate to their male offspring, compounded by his poor relationship with his own son.  But in the last several years of his life, he softened a lot, and always told me “Love you buddy” whenever we said goodbye.

He was a stubborn pain the ass, he was hilarious, and he was perpetually in a good mood.  He knew thousands of songs, and woke up just about every morning singing and whistling (much to my mother’s annoyance when she was younger).  He was known for telling you everything you did wrong with your golf swing JUST after you swung, and he refused to learn how to fix anything in the house because he knew “then people will ask me to fix stuff.”

I struggle with trying to fully encompass him in this post, and I’ve realized that I would be typing forever, so instead, I’ll just tell a few of my favorite shorter stories.

He was such a character, and I’m going to miss him a lot.  I’m sure I’ll be telling stories about him over glasses of Kentucky Bourbon for the rest of my life. 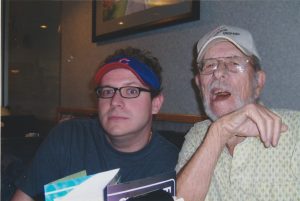